“The universe is full of magical things, patiently waiting for our wits to grow sharper.”
-Eden Phillpotts


Well HELLO there! I'm back from the vortex of work, work, work that has been my life the past few weeks. Rushed scrambled eggs (eaten way past my bedtime) have been my biggest culinary accomplishment as of late. Aside from the occasional spoonful of peanut butter eaten right out of the jar, and the odd apple grabbed while rushing out the door, it's been mostly eating out for me lately. Dear kitchen, I have missed you so much, are we still friends?


Things are still pretty hectic, so no video today, but stay tuned because I've got a good one in the works for you's all. It involves a special guest who shared her recipe for roasted red pepper ketchup with me not too long ago, and I can't wait to show it to you. But in the meantime, I want to tell you about this one: my sister's butternut squash soup. It's the most deliciously thick & filling soup, perfect for this chilly fall weather. My brilliant sister (the maestra of soups) came up with this recipe years ago and it instantly became a favorite of mine. By the way, have you noticed how butternut squash is in everything lately?  Big time trending... like sweet potato is SO fall 2010.  Just kidding, I don't believe in food trends. Food is food and shouldn't be subject to frivolous fads and such. But still, have you noticed?! Keep an eye out, it's butternut squash everything out there!  Anywho. Here is the real reason I love this recipe: it only has 4 ingredients!!  Butternut squash. Onion. Peanut butter. Coconut milk.

Now I want to tell you a little bit about my sister. She is kind of magic. One obvious manifestation of this is how she can find a dozen four-leafed clovers in the span of a few minutes (on lawns that I have spent half  my life scrutinizing and never finding even one!) But also, in all of her recipes, there is a little bit of that magic, pulling treasures and hidden flavours out of ingredients that most people wouldn't dream of putting together. When she was only 12 years old, she started a baking business and got her very own table at the Wolfville Farmer's Market (which she still has today). So she's been at it for a while and that's why I love making her recipes. They are tried and true. She is presently a sous-chef at T.A.N. Coffee in Kentville, Nova Scotia where her and chef Jay cook up a storm of deliciousness everyday, so if you're in the neighbourhood, be sure to check them out. Now if she was making this soup, she would probably sneak in a new surprise ingredient that would make me go "Ooh! What did you put in it this time?" And she would probably look at me with a little dance in her eyes and say "Oh you know, just a little something I threw in there for fun". So if you make this soup, don't be afraid to throw in a little of your own magic! (Mine was a chopped cilantro garnish, and a friend once dumped a half bottle of chili garlic sauce in there, not my style, but she said it was very good). Although I would advise you to make the basic soup first and try it as is because it is actually quite exquisitely perfect in its simplicity. 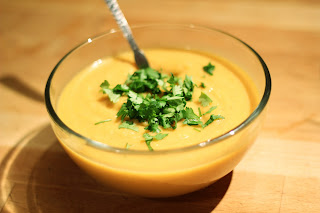 So here's how it goes: chop up that onion. Fry it up in a bit of oil until soft and golden, with a generous amount of salt. Peel and chop the squash in huge chunks  (should be a large squash, my photo above is not to scale) and throw it in a big pot with the onions. Add about 2 litres of water (or just enough water to cover the squash) and boil that until the squash is soft. Add about 1/2 cup of peanut butter and a whole can of coconut milk. Puree the whole thing with a hand blender, and add a bit of water if too thick. Season with salt (I like to use quite a bit in this recipe, something about the peanut butter just calls for salt). 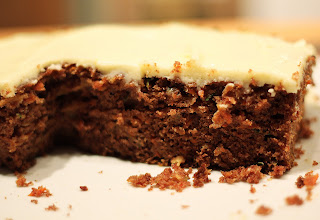 Now for dessert, please make yourself this harvest cake with apple cider & cream cheese icing. It is delicious. I found it in Edible Toronto magazine and it's like carrot cake but better (because it's got parsnip, zucchini, apple, AND carrots!!). And with a generous spread of that cream cheese icing on top, you can't go wrong.