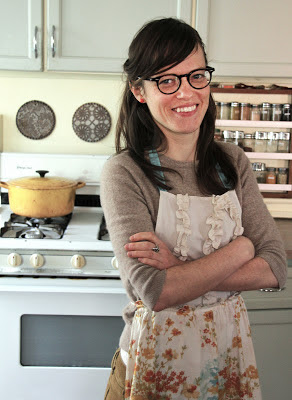 Hello and welcome to Kitchen Vignettes!

My name is Aube. It rhymes with globe. And it's French for Dawn. People sometimes think it's short for Aubergine, my nickname, hence those little eggplants up at the top. But although I am the child of hippy parents, they were (thankfully) not (quite) hippy enough to actually name me Aubergine.

Kitchen Vignettes is a video blog where I film the recipes I love. As a passionate eater of local, organic foods, I like to know the story behind what's on my plate so in my videos you'll usually catch glimpses of the gardens, soils, and farms that grew the ingredients in the featured recipes.

I grew up with a French Canadian mom who loved to cook with cream, butter, and meat (including the weird and wacky animal bits such as tongues, hearts, kidneys, etc.) and a yoghurt-making, bread-baking vegetarian stepdad who thrives on things like mustard greens, vegetable stews, and onion sandwiches. Somewhere in between these polarities is where I learned how to cook. My cooking is influenced by a love of Mediterranean food from time spent living in France, Italy, and Tunisia coupled with a passion for real food produced in a sustainable way. This blog is an homage of sorts to my mom who was a creative and adventurous cook, a passionate gardener, and whose enthusiasm for food was quite contagious. I like to make and share her many culinary inventions and traditions since it's a way for me to remember her and keep her recipes alive.

I started Kitchen Vignettes in the summer of 2011 in order to satisfy a growing desire to share recipes and connect with other food lovers. Since my obsession with all things food sometimes leads me to film my meals, grow my own ingredients, come up with crazy new concoctions, and ponder in probably way too much detail the fascinating politics of how food gets to our dinner tables, blogging seemed like a perfect outlet, using writing, photo, and video to share my culinary adventures and fixations. And while my background is in documentary filmmaking, I've found that making these short food videos is tremendous fun and in some ways, suits me better than creating long-form documentaries.

Since starting this blog, many marvellous things have happened, including being twice nominated for a James Beard Award in 2014 and 2015, receiving Saveur Magazine's 2012 Best Food Blog Award in the video category, creating a new Kitchen Vignettes series on PBS Food, and becoming a regular contributor to Edible Toronto Magazine and Reader's Digest. Blogging has helped me become a better recipe developer, food writer, photographer and video maker. I'm honoured that my work has been featured on: