Yesterday was my last day at the office for a while. So this was a goodbye cake for my co-workers. I wanted to make an upside down cake, but I was also dreaming of a layer cake with fluffy frosting. So I did both, rolled into one, because who says you can't have your upside-down cake and eat your layer cake too? 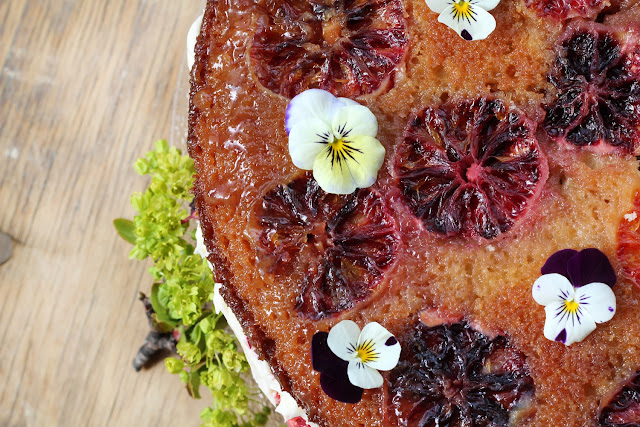 For the last 3 years, I've been a lucky lady to get to wake up every morning and go to work with the most amazing team of caring, committed people who are trying to make this world a better place. Working for a non-profit environmental organization is incredibly satisfying but also incredibly exhausting. People work long hours because they care about their work, and as with most jobs, it can be difficult to find the time for one's own projects. That's why I feel especially lucky to be going on a 7-month leave of absence to finish my master's thesis which has been on hold for years. While I'm at it, I'll also be doing an organic farming apprenticeship, learning how to grow delicious veggies and tend to farm animals. Something I've been wanting to do for only, oh, um, FOREVER. So while I'm sad I won't get to see the marvelous people I work with every day, I have to admit that this morning, the first day of my leave, I woke up feeling like a free woman!! Yeeeehaw! I spent the morning taking pictures of the maple tree outside my bedroom window, something I've been wanting to do ever since it started flowering but... couldn't find the time. Ah, life is good. 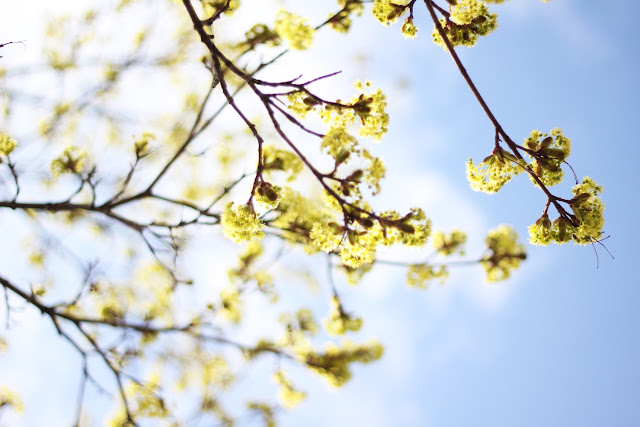 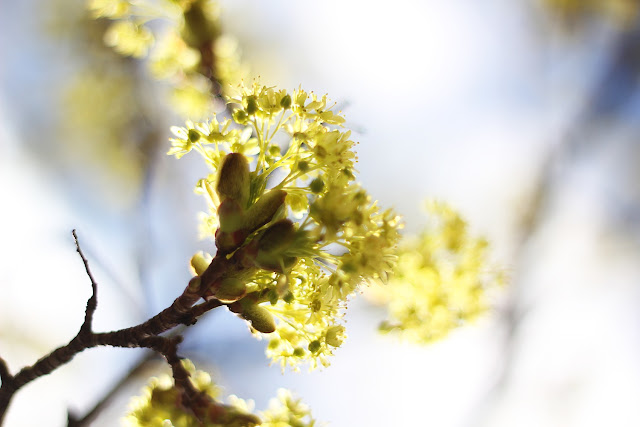 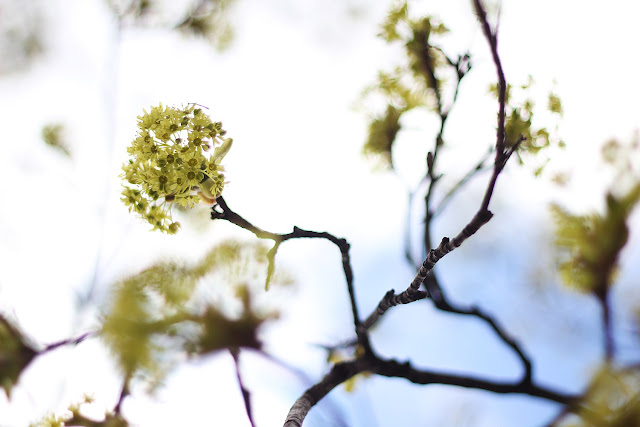 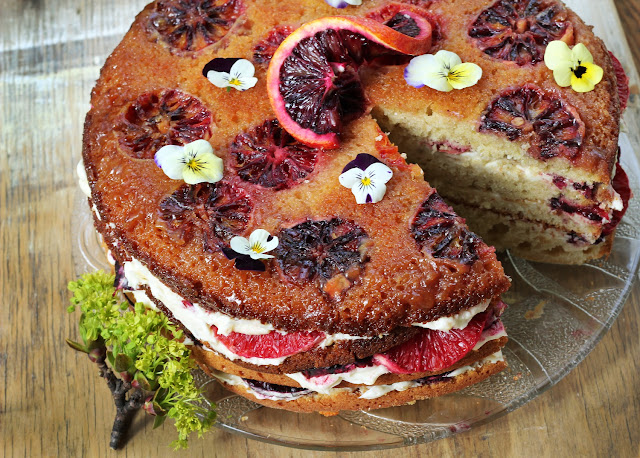 But back to this cake…  initially it was meant to be a pear upside down cake since I needed to use up a big jar of pears I canned a couple falls ago, but it turns out they had started going bad, and it was late in the evening, stores were closed... so I used the blood oranges I had kicking around on the counter. And then I remembered this gorgeous tart recipe I saw recently on Journey Kitchen that combines salted caramel and blood oranges. So that's how the caramel frosting came into the picture. No video for you this week sadly, but lots of photos instead. And the cake, well I didn't even actually taste it myself, but I can tell you that it disappeared within minutes and there were many smiling faces.

Once last thing. I should tell you about a fortuitous mistake I made with the recipe that gave it a neat twist. When I made the caramel for the frosting, the first batch turned out way too hard so that when I beat it into the frosting, it turned into a bunch of little hard caramel candy pieces, which at first I was upset about but then decided was actually quite lovely. Candy pieces in the frosting! So the recipe below doesn't include this mistake, but you could make it happen if you really wanted to (just leave out the cream when you make the caramel, add a bit of orange juice instead and cook it a bit longer than 6 minutes)...but if you do this, make sure you also make a batch of soft caramel to mix into the frosting. 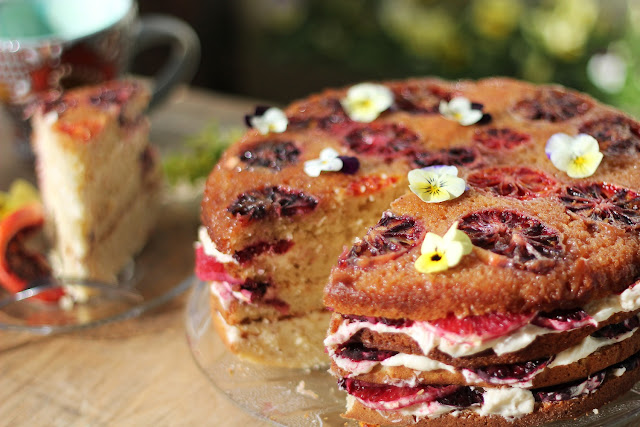 I adapted Martha Stewart's pear upside down cake, substituting blood oranges for pears, and adding orange rind to the batter, but if you have a favourite upside down cake recipe, you can use that. I found this cake recipe to be a wee bit less fluffy than I had hoped (maybe it's because I didn't have cream of tartar, can any bakers out there tell me?) but on the plus side, it made it easy to cut each piece in half for frosting. I doubled the recipe to make 2 cakes instead of one, which I cut into 4 and frosted between the layers. Here is my adapted version...

Cake topping:
6 tablespoons of butter
3/4 packed brown sugar (I only had white so I used that instead)
6 ripe blood oranges, thinly sliced (I used 2 for the top of the cake and 4 for the layers)

Make the topping: Melt the butter over low heat adding brown sugar until dissolved. Remove from heat and cool. Cut a piece of parchment paper in a circle to line the bottom of one of the cake pans. Butter the paper generously. Peel and slice 2 blood oranges, arranging them at the bottom of the cake pan. Pour the sugar mixture on top.

Make the batter: Preheat the oven to 350 F. Mix flour and baking powder. Cream butter and sugar until light and fluffy, add vanilla and egg yolks, one at a time beating to combine. Alternating with the milk, gradually add the flour mixture to the butter mixture, and mix at low-speed just until flour is incorporated (do not overmix). In a large bowl, beat the reserved egg whites and cream of tartar until stiff but not dry. Gently fold the eggs into the batter. Pour half of the batter over the oranges. Pour the other half of the batter into a second buttered cake pan (with no oranges). Bake both cakes until a knife inserted into the centre comes out clean. Immediately invert the upside down cake onto a cooling rack. Once the cakes are completely cooled, carefully cut both across so that you end up with 4 layers.

Make the frosting: Bring sugar and water to a boil over medium heat. Cook until dark amber, about 6 minutes. Remove from heat and add the cream and vanilla stirring until smooth. Allow to cool fully (30 minutes). If your caramel is too hard, you can reheat it and add a bit of water, mix thoroughly and re-cool it. In a large bowl, combine butter and salt and beat at medium speed, adding icing sugar and beating until a soft frosting is reached. Add the caramel and beat until fluffy. 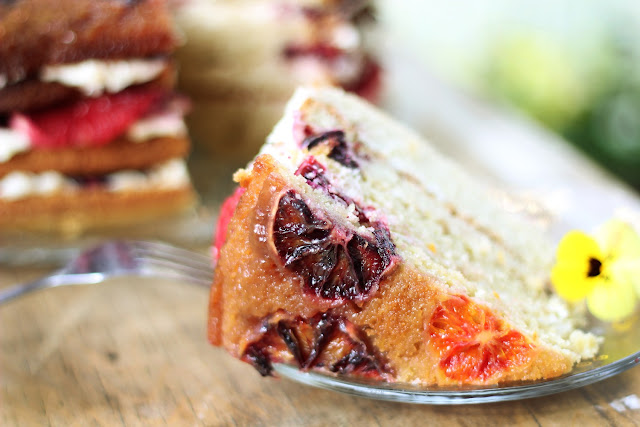