I have so much to tell you I don't even know where to begin. I guess this is what happens when you move to a new place. Life happens, but its flavour is a little more intensified somehow.

First, I'm dying to tell you about my visit to Salt Water Farm, named one of the world's top foodie getaways and a place I had read about even before I arrived here. Nestled on the midcoast of Maine in Lincolnville, they offer farm-to-table cooking classes and full moon dinners with a focus on local ingredients. I was a lucky lady to be invited to a crab dinner at the farm, which was exquisite, and which you can read all about here. But even better was meeting the culinary geniuses who run the place!

In other farm news, I have just finished my second week at Hope's Edge Farm and despite the fact that every muscle in my body is hurting, I am blissfully happy and learning so much. I've already witnessed (and filmed!) two lambs being born, which I'll share with you in the next blogpost. As you may have noticed here and here, you can count on me to give you cute animal videos when I don't have time to make a video recipe. Is that ok with you? Who doesn't love a cute animal video? I promise I won't overdo it. But today is one of those days when I couldn't get a recipe video together (too beautiful outside for video-making). And to accompany this wild edibles recipe, I thought it would be appropriate to show you this little dude, found grazing on some yummy plants a couple days ago. (I think he's eating lupin leaves, but it's hard to tell).

So yes, today's recipe is another wild plant dish. It's partly motivated by the enthusiastic response to my last post about Japanese knotweed, and also by this inspiring nature walk we went on last week led by wild edible plants expert Tom Seymour, author of the book Wild Plants of Maine. 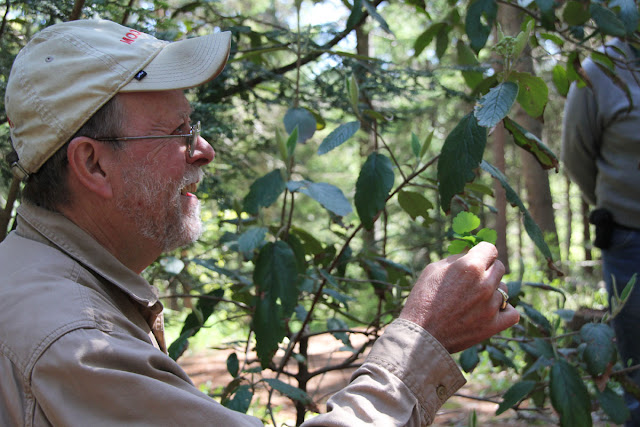 The walk was enlightening! Tom's enthusiasm was contagious and made us hungry for all kinds of leaves, and roots, and berries. 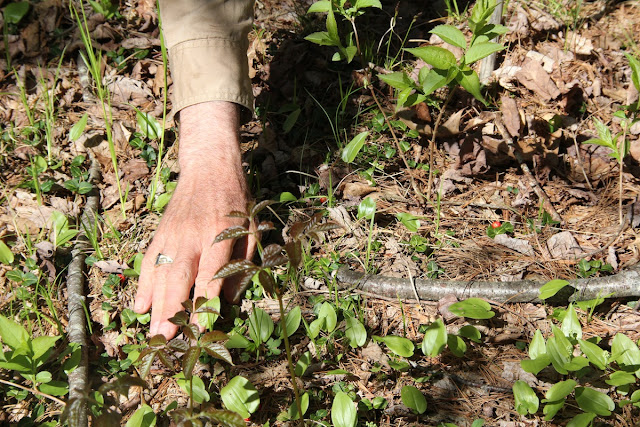 And while I learned about many new edible plants that I previously didn't know, I decided to stick to an old stand-by for this recipe: stinging nettle. Because it grows in abundance at the farm, and Farmer Tom put a bug in my ear by telling me about a nettley version of spanakopita that he and his partner like to cook up. Well. I couldn't resist that one since my sister Ariell happens to be FAMOUS for her spanakopita. She used to sell trays of it at the Wolfville Farmer's Market, and it would disappear in an instant. So I asked her to send me her recipe. I modified it somewhat since I was missing some of the ingredients. And of course used nettles instead of spinach. I was groaning and moaning when I bit into the first one, hot out of the oven. My sister's recipes never fail! 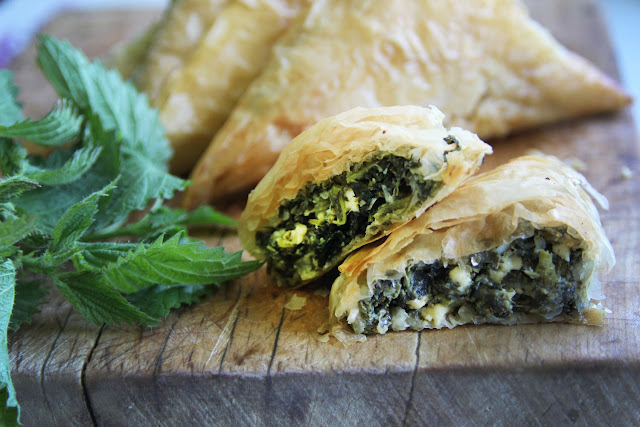 But first, a word about stinging nettle. It hurts. Pick it with care. 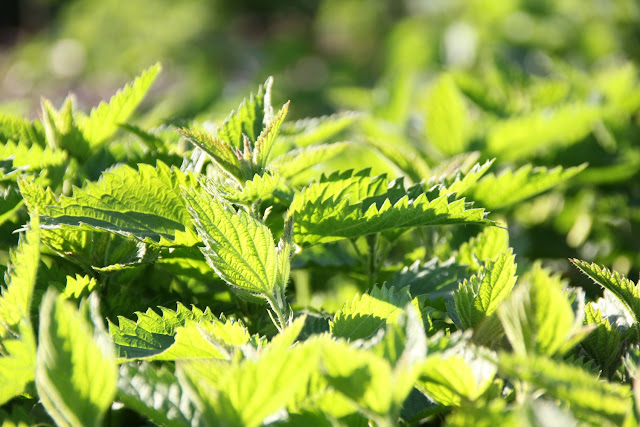 The reason it stings is that it contains formic acid, which is the same substance you get from a bee sting. But once cooked, its sting (obviously) goes away and it is delicious, AND extremely nutritious. Think spinach times 10. Nettle has more iron than spinach, it contains vitamin A, C, and E and it is very mineral rich, especially in calcium and magnesium. Its medicinal properties are too many to list here, but suffice it to say, it is VERY, VERY good for you.

Let me know if any of you out there do decide to make this. You won't be disappointed, I guarantee. 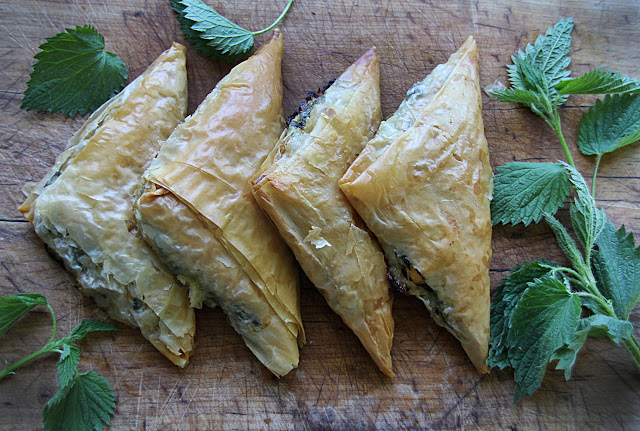 The pastry:
1/2 cup butter
1 package of filo pastry (thawed out in the fridge the night before) 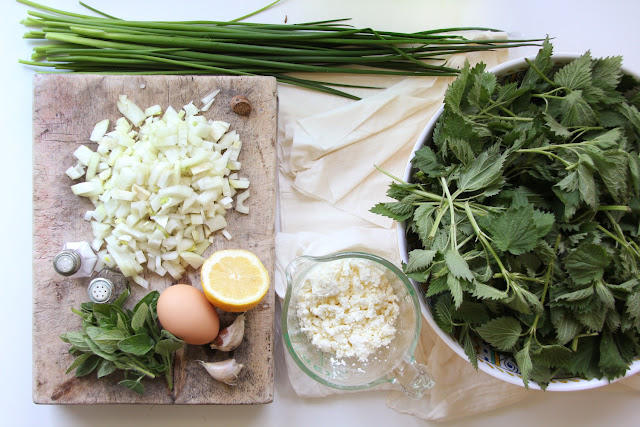 Make the filling:
Cook the onions in the olive oil until soft and golden. Add the garlic (and chopped chives if using) and cook for one or two minutes longer. Plunge the nettles in a pot of boiling water for about 1 minutes. Turn off the heat and leave to sit with a lid on for 5 minutes longer. (Save the water to drink for a nutritious tea!) Squeeze all water from nettles. Chop finely and mix with cooked onions and all the other filling ingredients. Add salt and pepper to taste (keep in mind the feta is very salty so tasting the mixture is a good idea).

Assembly:
Melt butter. Thaw out (night before) and unwrap filo pastry. Keep filo under a humid tea towel while you assemble the nettlekopitas. Take a rectangle of filo and brush with butter, lightly but thoroughly. Fold it in half, lengthwise. Brush butter on top. Place about 1/4 cup of filling on the lower edge. Fold diagonally across. Fold this way, all the way up, in a triangle shape, as shown in picture. Fold until you reach end of the dough. (except oops, I reversed pictures 2 and 3, so the 3rd picture is actually step 2) 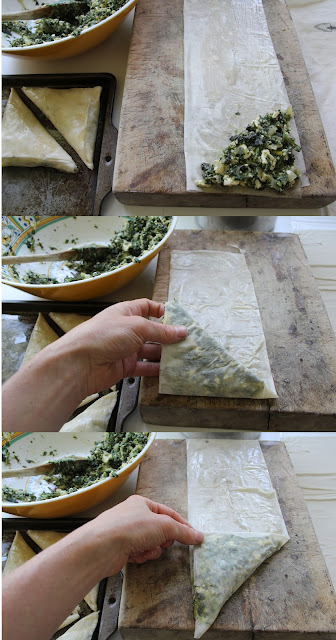 (At this stage, once all your triangles are made up, you can freeze the nettlekopitas if you'd like to bake them at a later date). Brush tops of triangles with butter and bake on an oiled baking sheet at 350F for around 30 minutes or until golden and crispy. 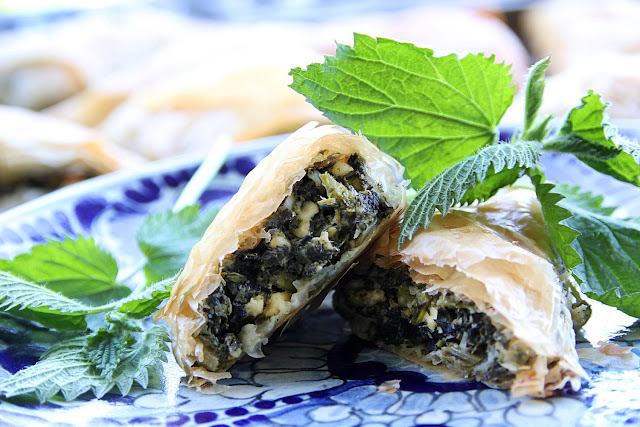