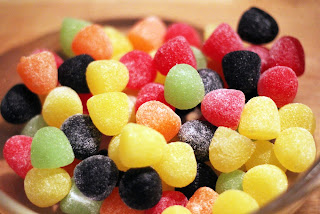 Gumdrop Cake is not really the kind of thing I would normally bake. But I did it for Jack.

Food is my favorite way to remember loved ones who have passed on. I feel closest to my mom when I'm making her recipes and eating the foods she used to make (you’ll be seeing a lot of her recipes on this blog). This morning, I wanted to make a recipe in honor of Jack Layton who passed away yesterday. It turns out Gumdrop Cake is one of his all-time favorites. His grandmother used to make it as a special treat when he and his siblings would visit.

Like so many Canadians, I am deeply saddened and still reeling from the news of Jack’s passing. For the past 3 years, I've had the pleasure of living in his Toronto riding. It's been so amazing to have an MP that I can admire, respect, be inspired by, and who would so promptly respond to letters and let you know that your concerns had been heard. The news also weighs down on me because it was almost 2 years ago that I lost my mom to cancer. She was about the same age, a bit younger than Jack. Both were too young to die. Cancer has become such an epidemic. One of the reasons I chose to work in the environmental sector is because I believe, like my mom did, that the health of our planet is directly related to our own health and well-being. And if we want to win the fight against cancer as a society (and also get to eat delicious and uncontaminated foods) we need to fight against pollution first and foremost. This film really gets to the core of the cancer issue for me personally, so I thought I’d share the trailer here, even though it’s not directly food related.

But back to Gumdrop Cake. And Jack. What a politician, and what a man. It is such a huge loss for Canada, at a time when we badly need his leadership. But as he so eloquently says in his last letter, the future must be faced with love, hope, and optimism. To cheer you up a bit after that trailer, and get you warmed up for the cake recipe below, here’s an excerpt from This Hour Has 22 Minutes “Baking with Jack Layton”. Rest in peace Jack, and may there be an infinite supply of your grandmother’s gumdrop cake in heaven.


***
Man. I could have done some fun stop motion animations with those gumdrops, but no time for that this morning, off to work! Just a quick photo of the cake before it gets gobbled by my co-workers. (Looks quite Christmassy doesn't it?!) 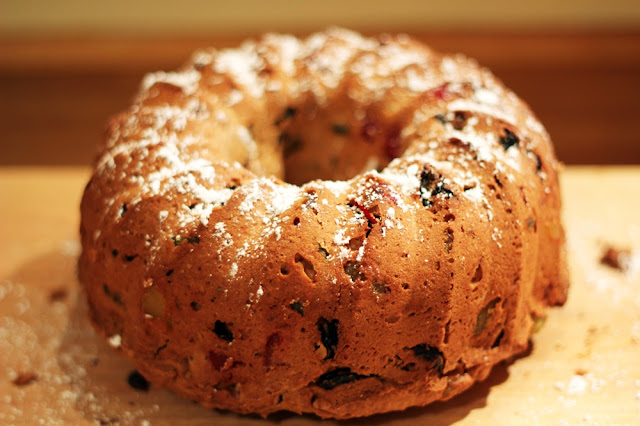